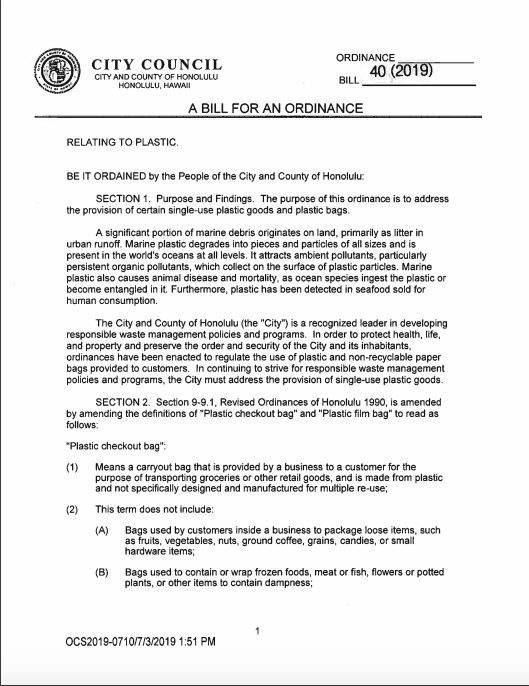 Bill 40 was a law that was passed by the City and County of Honolulu that bans all single use plastic cutlery and bags by the year 2022.

The City and County of Honolulu passed the controversial bill 40 on Dec. 17th, 2019. Let it be known that the reason and emotions behind the bill are all done in good intentions. However, the logistics of the bill and the potential ramifications cast a bleak outlook on the future of the island of Oʻahu including our campus.

Bill 40 prohibits the use of single-use plastic bags, utensils, and styrofoam containers. These are commonplace items used in the food industry and proved to be the most cost-effective choice. Shaka Bowl, a favorite among students, will now have to switch from using plastic cutlery to more eco-friendly/compostable solutions. A change that will affect prices and students.

The price difference between the plastic cutlery versus biodegradable cutlery is the main arguing point against bill 40. Several local retailers of plastic and compostable cutlery declined to comment on the issue. However, online retailer, Global Industrial, has the prices for the two cutlery publicly displayed on their website. Plastic cutlery cost $10.75 per 1,000 packs whereas compostable cutlery cost $83.95 per 1,000. This is a 781% increase in costs. What does this mean for businesses? In order to recover from the price increase of using more biodegradable cutlery, businesses would need to increase the already high prices of meals. This action only snowballs from here.

According to the website of Rainbow Drive-In, the Kapahulu location sells an estimated 1,000 plates a day. Rainbow Drive-In operates 7 days a week, so the company would be spending an approximate total of $2,350.60 on compostable forks alone compared to $301.00 for plastic forks. Sounds crazy right?

If businesses tack on the extra costs of using biodegradable cutlery onto the price of meals, the consumer naturally ends up having to pay more. Even if the price increase is an amount such as 50 cents a meal, the average person who maintained 3 meals a day would end up paying $42.50 more each month. With Hawaiʻi being one of the worst when it comes to homelessness and residents in poverty, this would only make more people become homeless. Families who live paycheck to paycheck would be harmed the most when this ban goes into full effect. If the family has the typical amount of 4 members, the cost difference alone would amount to 170 dollars.

In the event businesses donʻt tack on the extra cost, this means that businesses would lose $73.20 every time they purchase compostable forks alone. Every other piece of compostable cutlery also reflects a significant price jump. The less profit the business makes, the lower the operating budget is for that company until they need to raise the prices of meals or layoff employees. Laying off employees would only add to our homeless population or those below the poverty line.

Bill 40 claims to “help save the environment”, but in a report released by Lesley McClurg of Capital Public Radio, found that the compostable cutlery that is advertised as the eco-friendly solution, doesnʻt compost on its own. This cutlery need to be processed in a recycling facility to break down into its original materials or potato spud, cornstarch, etc. She described to readers the observation that when she went to a landfill and searched a pile that was left composting for 5 months, it contained an intact compostable spoon.

Josiah Kaaʻa, a senior, said “I think its ridiculous that they make these things “compostable”, but they arenʻt really.

This really brings into question, are these “compostable” cutlery really the solution for saving the environment? Or is it another form of plastic? If we are trying to reduce the amount of single-use plastics, the process should not be a zero-tolerance policy, but a 3-year strategic plan implementing tax breaks for companies making eco-friendly products, research grants, and a tax for plastic products that gradually increases every year. This gives businesses and restaurants time to comply and help develop eco-friendly products that are comparable in price to plastic products and efficient to produce. 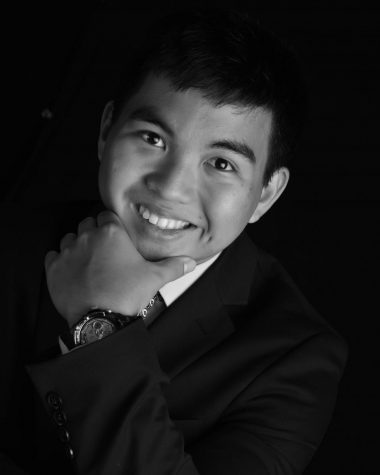 EMAIL: joby.lum@imua.ksbe.edu
My name is Joby Lum, some know me as Mateo and I am a senior and a first-year member of Ka Moi. I came to the hill during my Freshmen year. I have many interests that range from photography to politics and medicine. I am the president of the KS Lifesavers Club and the KS Aviation Club. My dream is to become a paramedic and be able to serve those in my community. I chose to join Ka Moi because I love to write and be able to show the other side of a story. I feel that Ka Moi will help me become a stronger writer and expose me to the world of journalism.

Comments and constructive feedback are crucial to improving the quality of this newspaper. Please be respectful of peopleʻs opinions and ideas. Any hateful comments will be promptly removed.

If you want a picture to show with your comment, go get a gravatar.