First Female Kicker Since 2009: Experience of a Lifetime 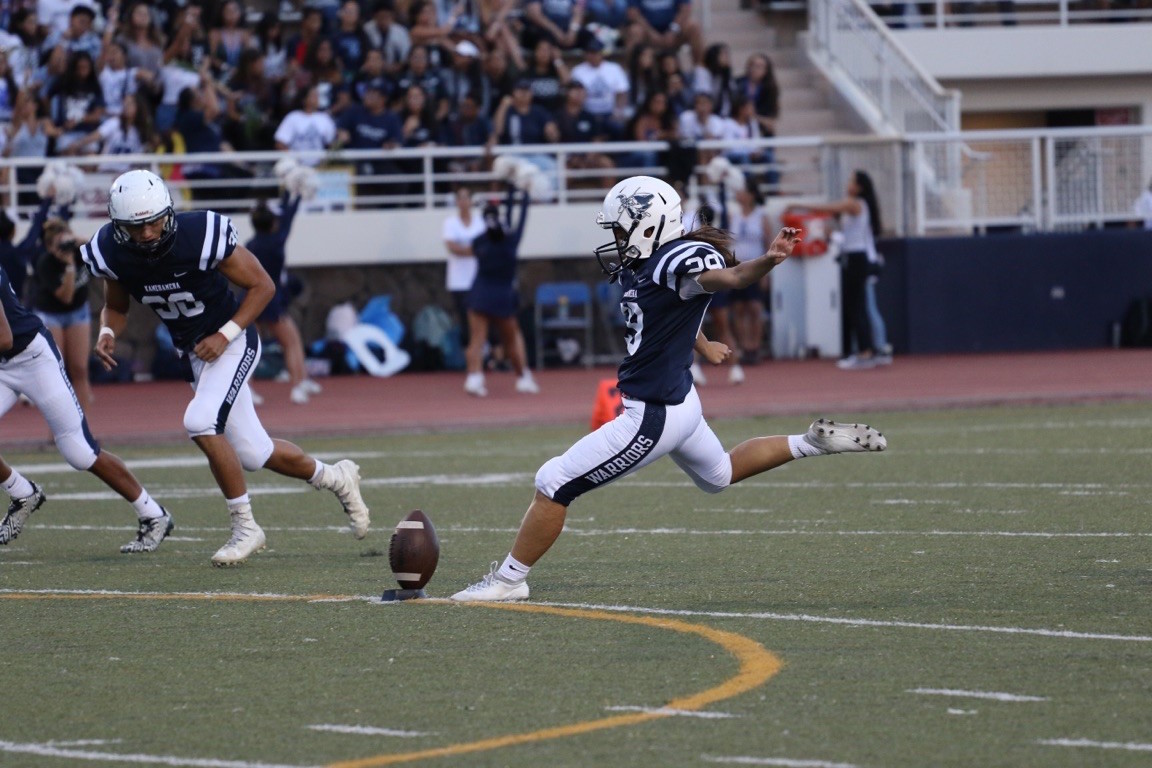 Defying gender norms has become a reality for senior, Leihali‘a Panui as she becomes the first female football kicker since 2009.

Panui is the ASKS Executive Director alongside Honu Nichols and one of the kickers on the varsity football team. “As one of the leaders of the student body, balancing ASKS and football has been tough, but I still continue to get the work done, said Panui.

The influence of her family, planted the seed for the love and passion she has for the game.

“I was always surrounded by football growing up, whether it was watching NFL and college football with my dad or joining my brother and cousins at football conditioning,” said Panui. The influence of her family planted the seed for the love and passion she has for the game.

Panui was originally skeptical about joining the football team because of her prior hopes of continuing soccer in college, but she knew that she had to make an obligation to herself.

Playing college soccer has always been a dream of hers but football season meant taking a long break from soccer. “Being that it is in my senior year, there is a chance that I will not be playing soccer in college and I have come to terms with that,” said Panui.

“If it is in God’s plan for me to play soccer, then it will happen,” said Panui. There were many obstacles in Panui’s journey but her dream has now become a reality.

She attended spring ball conditioning in the hopes of making her mark this football season. She wanted to experience football for herself after the influence from her family growing up. “I didn’t tell my parents at first, I just did the sign-ups online, went to spring ball conditioning and found my own ride home,” said Panui.
She believes she has defied the gender and social norms and will be able to achieve greatness this season. “Being that I’m a senior this year, I promised the boys on the football team that I would join the team and come out for kicker,” said Panui.

There were questions on whether or not people would be supportive of Panui joining the football team. When asking Panui if she faced any controversy throughout her football experience so far, she said, “No one’s been controversial so far, everyone’s been very supportive and protective of me, especially the boys on the team, we’re practically family.”

Panui continuously receives support from her family, who were at first skeptical in the beginning. “I’m the youngest girl of the family and my dad and I are so close, it took a lot of convincing from my dad because he didn’t want to see me getting hurt but he always knew I had a passion for the game,” said Panui.

In the experience of her first and last football season as a kicker, Panui’s football Coach, Abu Ma‘afala gives his full support since spring ball conditioning. “She earned the right to be on this team and great effort is her greatest trait.”

Panui believes that Coach Abu strives for them to become state champions but his priority is their wellbeing and potential. “Coach Abu would rather us grow as a team and as individuals rather than win games, he wants us to be people that’ll go out in the world and make a difference,” said Panui.

Coach Abu Ma‘afala hopes that having Panui on the team will inspire other girls on campus to come out an participate. “At the end of the day we don’t see sex, we just see kids wanting to come together for a common goal,” said Ma‘afala.

Panui can be seen as an inspiration to girls who want to defy the gender norms and continue and practice something they love. “If you love it and it’s something you’re so passionate about, don’t let a social norm or people tell you what to do. I feel like if I didn’t come out this year, I would’ve regretted it so much,” said Panui.

It has been seven years since our last female kicker and with this year, Panui looks to inspire those to realize that they are capable of anything if they put their minds to it.