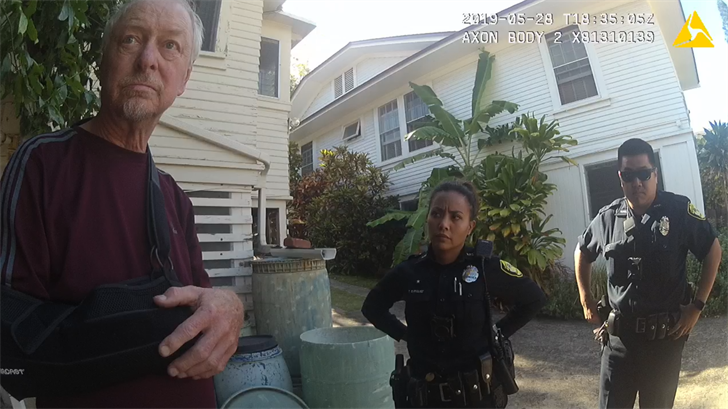 Jerry Hanel and Officer Enriquez (center) back in May 28, 2019, after his misuse of the 911 emergency service

What transpired in the Diamond Head area on January 19th has shaken up the community, citizens still in shock of such a severe tragedy being so close to home.

The Honolulu Police Department said that everything began with the eviction notice for Jerry Hanel, who lived in a house on Hibiscus Drive. After Lois Cain, the home’s owner, sought to confront and evict Hanel that Sunday morning, HPD said that he refused to sign it – soon stabbing another tenant, opening fire to officers arriving on scene, and setting the house ablaze. The flames quickly spread to properties nearby and caused firefighters to struggle to gain entry to the place amongst police investigation. Additionally, two officers were shot amidst the chaos: Officer Tiffany Enriquez, a seven-year veteran, and Officer Kaulike Kalama, a nine-year veteran.

Court documents display that 69-year-old Jerry Hanel had four TRO violations against him and was due in court on Tuesday, January 21st on a false 911-call charge. According to Hanel’s lawyer, Jonathan Burge, Hanel had serious mental health issues.

“He thought the secret service and government were tapping his phones ­– would come into his house and tap him. That kind of thing. He didn’t have cell phones for that reason. He was a little bit of a weird guy, but you would never expect he’d do what he did today,” says Burge on an interview with KITV4 Islands News.

Rebecca Atkinson, a neighbor who lives near the incident, shared her experience with Hanel in an interview with KHON2 News. Like other neighbors, Atkinson filed a Temporary Restraining Order on Hanel. “People said he was maybe paranoid or schizophrenic. He was doing harmless things, but it all adds up to harassment. So, I wanted to have a restraining order in place.”

The news about Hanel has prompted residents to question the resiliency behind TROs and mental health check-ups. Why wasn’t Hanel being closely observed, having four TROs against him? Could this have been avoided, had things regarding his mental health been different? Police Chief Susan Ballard spoke about this matter on Hawaii News Now. “I think more than anything else we have more issues with mental illness,” Chief Ballard said. “We have to be able to track [people] but also get them the services they need.”

Currently, lawmakers want to look at mental health red-flag bills. A bill by Senator Karl Rhoads gives judges a choice to refer a defendant to do a mental health assessment, including TRO cases.

“If you’re mentally ill you are going to go to a facility. You’re going to get the help that you need because obviously you cannot make those decisions on your own,” Chief Ballard said. “I know it sounds tough, but I think it’s time for tough love now.”