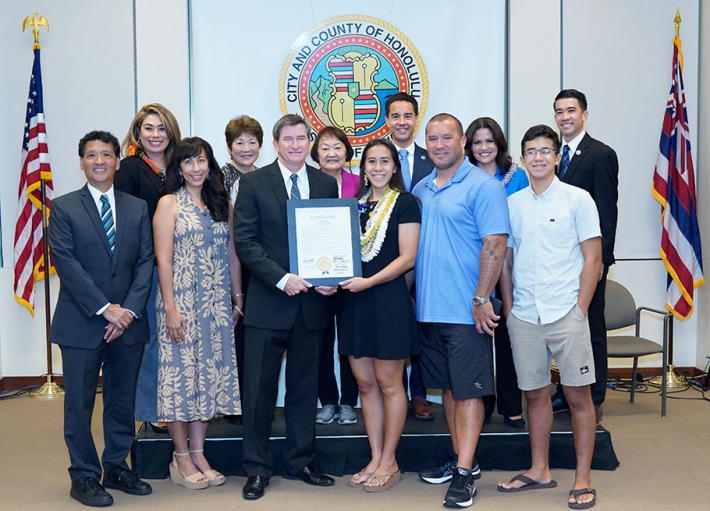 Tehani Malterre, a 2019 graduate of Kamehameha Schools Kapalama, has recently been recognized as the youngest neighborhood board member in the state of Hawaiʻi.

On Oct. 9 at the Kapolei Hale, the Honolulu City Council honored Malterre as she was elected for a spot on the Hawaiʻi Kai Neighborhood Board. While she was still in high school, she ran for the board No. 1, Subdistrict 9 and alongside with her, 553 individuals competed in the process. Councilmember Tommy Waters said to KHON2, “I am proud of Tehani for her service as one of the youngest elected officials in Honolulu. She represents a new generation of civic-minded young adults who will shape the future of our city.”

The Board was created in 1973 to create participation in making decisions for the community. With 33 Neighboorhood Boards that meet once a month, Malterre is now apart of the government process as she learns more about important issues that will impact the community. Malterre said, “It’s really important for me, and it’s a big responsibility that I’m really looking forward to taking on over the next two years as I represent the community and my family.”

Malterre currently attends University of Hawaii at Manoa. Prior to graduating, Malterre was able to be an balanced student around campus, participating in multiple varsity sports and clubs. She was an all star player in cross country, basketball, and track and field. Malterre also was an active club member in Key Club and National Honor Society while receiving an Honors Diploma. According to English teacher Mr. Vinta, “she was always busy doing things. From school work to community service to working on her basketball skills, she was a non-stop ball of energy.” Alongside with other teachers, it did not come to Vinta’s surprise when Malterre was elected. Vinta said, “She is a true example of a servant leader and a good and industrious young woman.”