New and Old Anime to Watch While in Quarantine 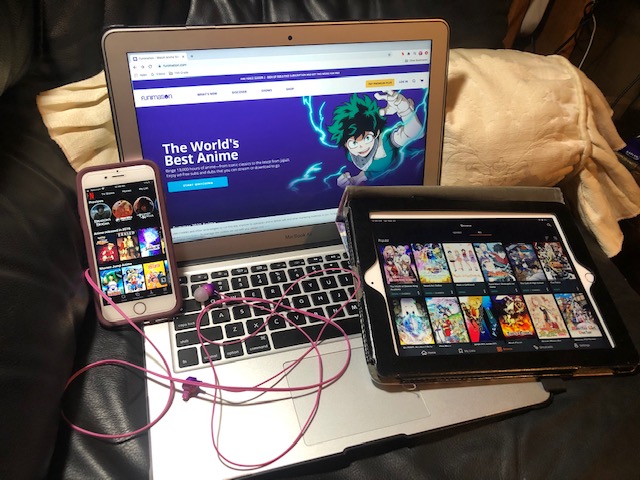 There are endless devices and streaming platforms to choose from when deciding what anime to watch in COVID-19 blues.

Quarantine has left many without much to do and the lack of new releases in regard to movies, TV shows, and, in particular, anime doesn’t help. However, that does not mean there isn’t anything available to watch. There are quite a few entertaining, underrated anime existing already and highly anticipated shows to watch out for as we approach the Fall 2020 Anime Season. Here, I list off both old and upcoming anime to start watching to pass the time staying at home.

Now is a perfect time to binge the hit volleyball novel as the second part of season 4 premieres, according to Crunchyroll, on Oct. 2 this year. This anime is a wild ride for both sports fans and anime fans alike as it manages to maximize the dramatic highs and lows of sports by enhancing them with all the hype that comes from animation and the exciting shōnen character arc. Haikyuu follows the story of high school volleyball player Shōyō Hinata as he joins the Karasuno Volleyball team in the hopes of succeeding in the sport despite his short height and lack of prior experience. With the help of star setter Tobio Kageyama and his fellow teammates, Hinata works to become the best by fighting in thrilling match after thrilling match.

A Lull in the Sea

This is a dramatic romance story that explores both the intimate relationships between young kids and the world these kids exist in, a gorgeous world where humans co-exist with a species of humans who are able to live under the water through a magical skin known as ena. This lends itself to absolutely stunning scenes of azure seas, sparkling moonlight against the waves, and a vivid town underneath the water. The drama is as eye-catching as the scenery with the addressing of deep issues like the effects of change, separated families, and racism. The romance can be a bit convoluted at times, however, as it has one of those complex, twisting relationships that one might need to record on a graph to keep track of. Despite that, A Lull in the Sea still manages to develop these relationships organically and deeply, even if certain characters can be hit or miss in regard to likeability.

Sleepy Princess in the Demon Castle

Set to premiere on Oct. 6 this year (according to MyAnimeList), this anime is a comedy that presents a zany premise with an even zanier cast of characters. If the manga is anything to go off of, this anime will be a comedy to watch out for with its simultaneous wholesomeness and darkness. After all, the plot features a cutesy princess with some world-class home-ec skills and very psychotic tendencies, that is, if you get in between her and her night’s rest.

This show is criminally underrated. It is difficult to discuss exactly why without spoiling the show, but the development of the plot and characters are deeply thought out, surprising, and extremely intriguing. This anime features the story of a crew of young teenagers who need to make their way across dangerous planets as they were dropped into the deep unknowns of space by a mysterious wormhole. A fairly standard sounding plot that develops into something unique and extremely entertaining to witness through unique characters, harrowing situations, and jaw-dropping plot twists.